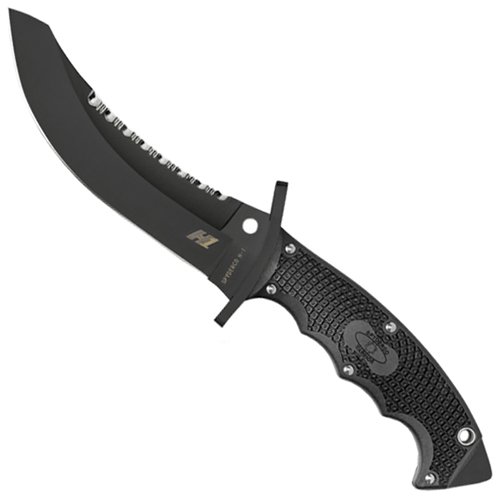 The Warrior fixed blade is one of the world's most intriguing combat knives. Based largely on the groundbreaking research of close-combat icon Michael Echanis, the original Warrior was a radical design intended primarily for use with reverse-grip tactics inspired by the Korean martial art of HwaRangDo. Produced in limited quantities by the late Al Mar and later resurrected by the martial artist Bob Taylor and Echanis contemporary Randy Wanner, it is one of the most coveted combat knives ever made.

The Spyderco Warrior faithfully retains all the salient features of the original, while adding a number of performance enhancements. Its revitalization happened at the request of our Israeli customer, Guy Rafaeli.

Ground from rust-free austenitic H-1 steel, it possesses the same differential hardness properties of a clay-tempered Samurai sword, giving it extreme cutting power and shock resistance. Its full-tang construction and textured handle scales provide a superior grip and edge orientation, maximizing the knife's effectiveness when employed with its signature tactics. The sheath is a black ballistic nylon snap-closed sheath with Molle-vest attachment capability.

The designers of the original Warrior knife, Randy Wanner and Bob Taylor, have generously donated their royalties on all sales of the Spyderco Warrior to the Special Operations Warrior Foundation. On their behalf, Spyderco donates three percent of net sales for each Warrior sold to the Special Operations Warrior Foundation. This worthy organization, a non-profit 501 (c) (3) organization, has provided college educations to the surviving children of Army, Navy, Air Force and Marine Corps special operations personnel killed in combat or training since 1980. Additionally, the Warrior Foundation provides immediate financial assistance to special operations personnel severely wounded so their loved ones can be bedside during their recovery.