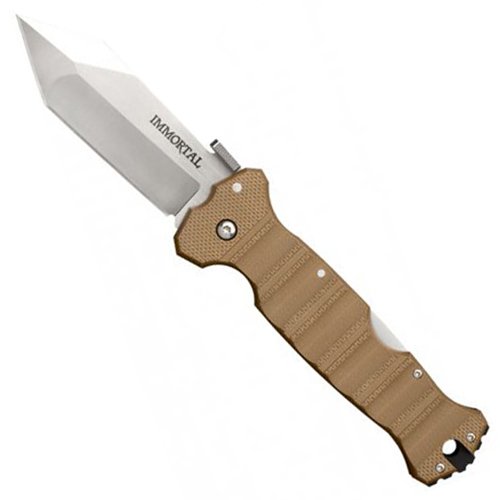 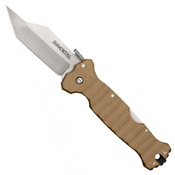 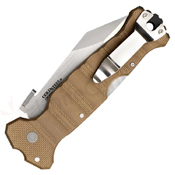 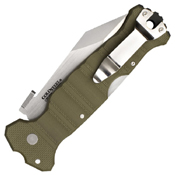 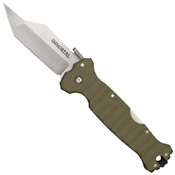 Designed by custom knife-maker Mike Wallace, the Cold Steel Immortal is a big, bad and battle-ready tactical folding knife that takes its inspiration from the infamous blades of the Roman army! The Immortal’s eye-catching and unusual blade is ground almost like an extra wide Tanto point, but with an angular chisel ground false edge giving it a distinctive Gladius-inspired shape, while it’s contrasting two tone line-grain satin polish further emphasizes those angular grinds – making the Immortal really stand out from the crowd. Equipped with Andrew Demko’s patented Thumb Plate, the Immortal’s razor sharp American CTS XHP steel blade can be opened and used ambidextrously, or deployed with lighting speed when snagged and drawn from a pocket, bringing the knife into play in a flash! It's deeply grooved and contoured CNC machined G-10 handle scales feature a flared integral finger guard and thumb ramp which offers an extremely secure and comfortable grip even in the worst conditions or when wearing thick gloves. Furthermore, the Immortal’s sturdy 6061 Aluminum back spacer has been designed to protrude slightly from the handle butt, creating an aggressively textured filed pommel that can be used to focus the impact of less-than-lethal percussive blows. Outfitted with our ground-breaking Tri-Ad lock for added strength, shock resistance, durability and security, the Immortal is an excellent choice for our modern day military. An unashamedly tactical folding knife that will the pride of any warrior’s collection!