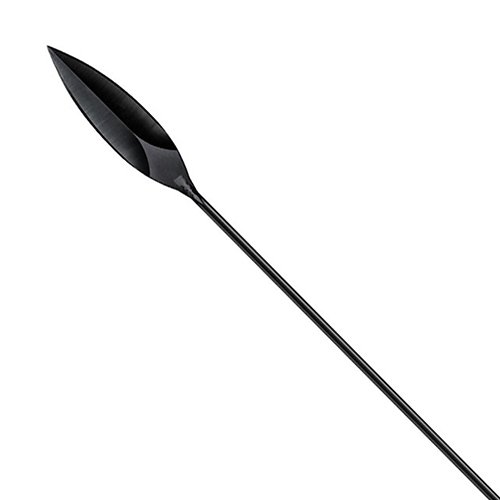 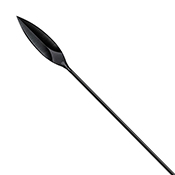 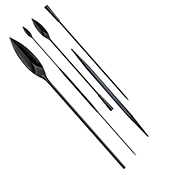 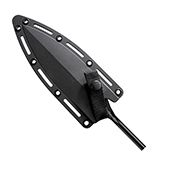 The Samburu tribe who inhabit Kenya's rugged northern frontier are a tall, lean people who eke out a living as semi-nomadic herders of sheep, goats, donkeys, camels and cattle. The warriors of the tribe known as "Lmurran" are particularly impressive, as they never cut their long braided hair and decorate their faces and torsos in beautifully intricate patterns using a cosmetic mixture made from animal fat and red ochre. Since their flocks and herds are constantly menaced by predators and subject to raids by lawless "Shiftas" (bandits) from Somalia, they seldom venture outside their "Kraals" (a kind of makeshift hut) without being thoroughly armed. In fact, no warrior worthy of his name would think of being caught without his spears. You see, the Samburu warrior's seven foot long throwing spear is the most advanced, state of the art spear of its type on the planet. With this extraordinary spear, warriors routinely dispatch marauding leopards, lions and even firearm toting bandits at unheard of distances. Each of our Samburu spears break down into three components: The first is the spear head itself, permanently welded to a thick steel shaft. Second is the counter balancing butt spike also known as the shoe. This is used as an alternative point for practice throwing, preserving the actual spear blade itself for more serious work. Third is the black, hardwood handle with a double taper connecting the head and shoe. The Samburu spears come unassembled for ease of transportation. All you have to do is fit the blade and butt spike tightly to the handle and attach them with the provided retaining screws. They come complete with a Secure-Ex® sheath. These spears could be described as the 300 Winchester Magnum of the spear world. They can be used at long range, fly straight, have a flat trajectory, hit hard and penetrate deep. Like the 300 Win Mag, they can be used to take any animal in North America. NOTE: We've made our Samburu spears as tough as possible. However, if you bend your spear shaft or "shoe" (butt spike), it can be easily straightened in a vise or with a hammer, and the tough hickory handle of your spear can eventually break, so please be prepared to replace it.

How are we doing? Give us feedback about this page.

With the changing COVID-19 situation & Omicron variant, most of our carriers are experiencing impacts on staffing. They have to maintain safety protocols and adjust operations to serve people, so customers may experience delays unfortunately.
Please bear with us as COVID is making things unforeseeable. Thank you for your understanding.