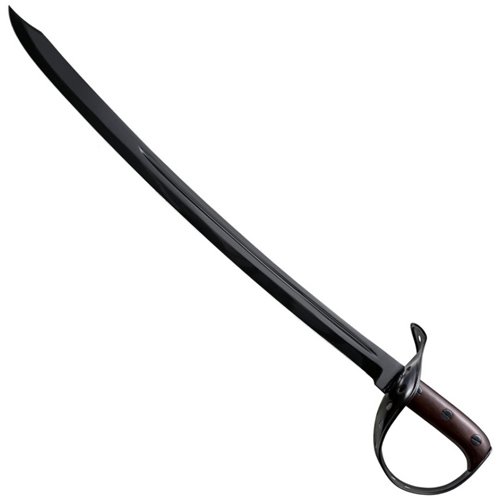 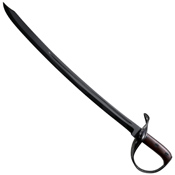 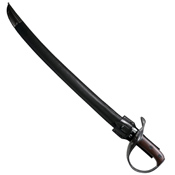 Cold Steel company President Lynn C Thompson drew upon his vast sword fighting experience to combine the finest attributes of several different swords to make an entirely new, and unbelievably potent fighting blade that they have dubbed the Hybrid Cutlass. Lynn has been training with master swordsmen Ron Balicki, Luke LaFontaine and Anthony DeLongis for many years, and ever since the year 2000 they have trained exclusively full-contact with aluminum and steel blades and minimal protection! This incredibly hazardous training has served to not only vastly expand their fighting knowledge but it has kept them honest - taking less unnecessary risks and relying on their skill at arms and the inherent strong suits of their chosen weapons to keep them from harm. Understandably, as this dangerous training regime progressed, the fighters began to favor swords with greater reach, greater fluidity and range of motion, and with greater hand protection! It was during this "sparring out" stage that Lynn began to customize and improvise with his most favored swords - the 1904 Austrian Saber and the 1917 Cutlass. The Saber provided almost unparalleled hand protection with minimal bulk but it favored fighting from horseback, whereas the Cutlass was an excellent tool for fighting on foot, lightweight, maneuverable but still more than capable of opposing bigger weapons. By combining the best features of these two swords Lynn began to create the first design evolution of the Hybrid Cutlass - a truly modern fighting sword. The Hybrid Cutlass features a short, stiff, razor sharp and beautifully blued blade which is both fast and fluid in the hand. It's perfectly designed guard has a sturdy reinforced rolled edge for added strength and hand protection while still being small enough to lie comfortably at your side without ever being cumbersome or unwieldy. Similar in size to many of the "tactical" swords offered by our competitors while being vastly more capable and versatile. The Hybrid Cutlass is able to catch, parry, block and oppose even far larger and heavier weapons while being sharp and nimble enough to dominate almost any engagement, and when combined with a pistol or revolver it becomes a Close Quarter and Melee monster!