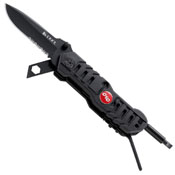 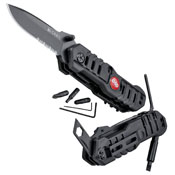 Columbia River Knife & Tool, in Tualatin, Oregon, is proud to be just down the road from Crimson Trace Corporation in Wilsonville, Oregon. Both of us have grown dramatically over the past fifteen years. CTC has shipped nearly a quarter of a million laser sight systems for popular handguns and rifles to the U.S. military, major law enforcement agencies, and security-minded citizens. As the laser technology leader, they offer laser sights for the smallest .32 caliber automatics, and on up to AR15/M16 carbines.

They asked us to collaborate on a series of tools that would be useful to every Crimson Trace owner in the adjustment and maintenance of their sights.

Picatinny Tool™. Here's the perfect multitool for the serious shooter, with special functions for operators of AR15-style carbines. The tool features a rugged tactical skeletonized design in non-reflective black finish. It makes a highly versatile tool for attachment and adjustment of CTC sights designed for attachment to Picatinny rails, and it is also designed to ease the breakdown and cleaning of automatic pistols and rifles.

Fold out tools include a hex wrench driver which can be used as an on-axis screwdriver, or as an angle driver. Hex bits include small flat, Phillips, Torx® 20 and Hex 3/32. A fold-out blade incorporates a scraper edge and an 8 mm wrench. The fold-out pin with rounded end can be used to clear failure-to-eject jams, and also to remove slide release pins. The two CTC Allen tools are held in molded grooves in the glass filled nylon scales, which have an aggressive grip pattern. As a "plan B" weapon, the Picatinny Tool also is a locking liner folding knife with a 2.8" high carbon stainless steel blade with a Combined Razor-Sharp & Triple-Point™ Serrated edge.