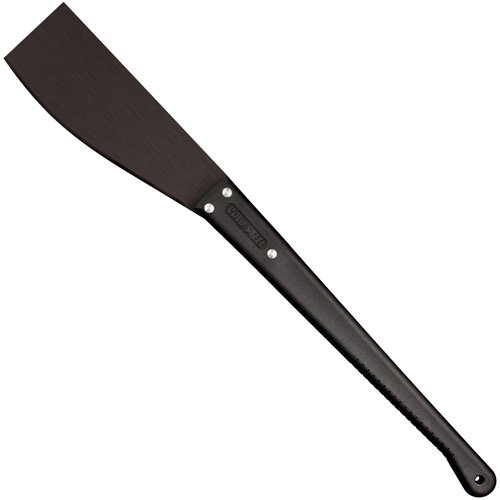 If you were suddenly castaway on a desert island or stranded in the wilderness or a jungle, what's the one tool you would want at your side? The answer is a good machete. You see the machete, over the last three centuries, has proven to be the ultimate outdoor and survival tool. It will cut, chop, slash, hack, split, scrape, scoop, hammer, dig, crush, carve, whittle, crack or smash just about anything you can put in front of it. The machete also makes a deadly improvised weapon. It can be used to kill both fish and game and will gut, scale, filet, skin, quarter and butcher them for the table as well. And when you look at its meager cost, it's got to be one of the best bargains for hard earned cash in the world. In fact it's so inexpensive and useful that even the poorest peasant in South America or tribesman in Africa invariably owns one and counts on it as one of his most precious possessions. These blade is made out of 1055 Carbon Steel with a tough spring temper and are surfaced with a black, baked-on anti-rust finish. Each Cold Steel machete comes with a good utility edge which, with just a little work, can be made hair shaving sharp. The tough, Polypropylene handles of this machete is designed to provide a comfortable secure grip, and they are rugged enough to resist chipping, cracking or breaking, so they last practically forever. Some big cutting jobs are often best handled by using both hands and that's where the Two Handed Machete comes into its own. Its long polypropylene handle and tough 1055 carbon steel blade give you the leverage to cut down small trees as well as thick brush and tangled vines. Weighing just under two pounds and measuring 32" in overall length, it's light and compact enough to lash to your pack and is a natural to stash in your vehicle, boat, or airplane. In a self defense emergency, the Two Handed Machete will also double as a highly effective sword. It's light enough to be swung with either one or both hands.